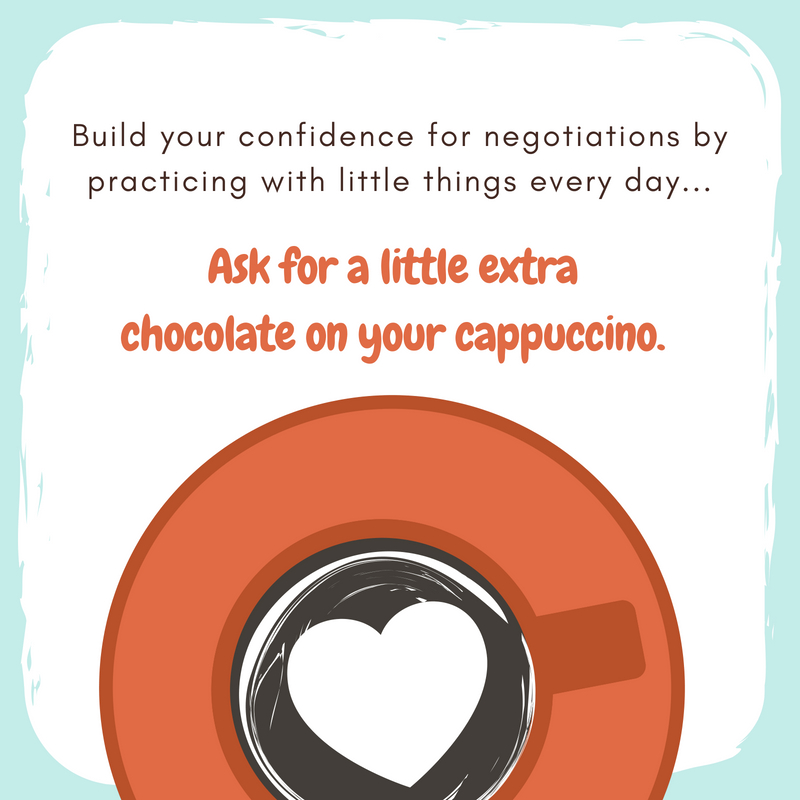 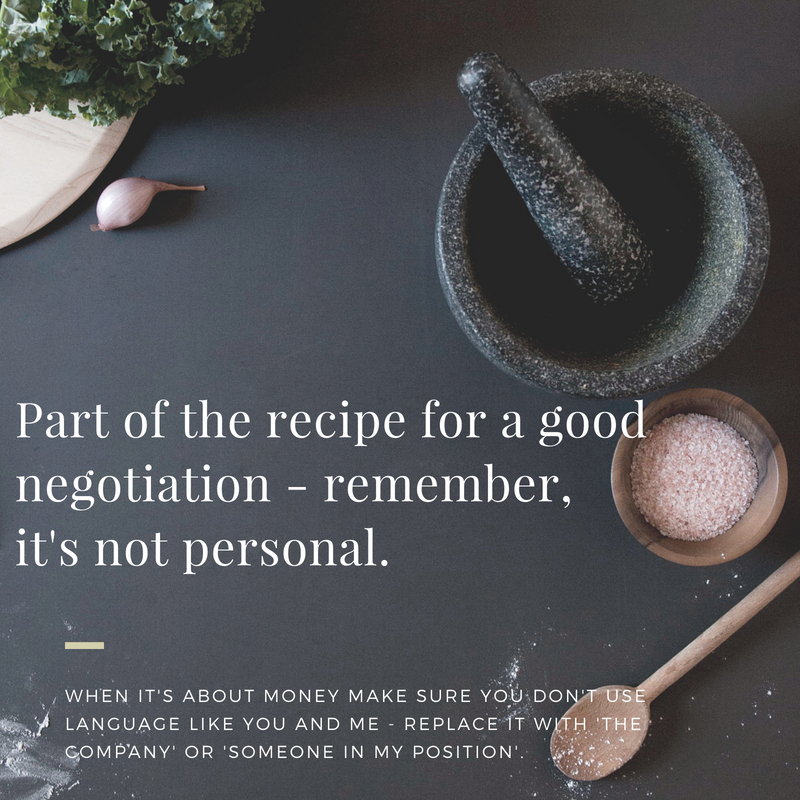 Recently a one of my favourite people was talking about me (which is always a bit interesting), specifically she mention the biggest thing I taught her about negotiating, she said – until I worked with Sam, I always thought to be a good negotiator you had a be a bit of an a**hole, that you had to be aggressive to get what you want.

This statement made me smile. Don’t get me wrong, I can be a bulldog in a negotiation, when it’s necessary, but why would you want to behave like a jerk to get what you want? It’s just a conversation to find out what’s most important to each of you and talk through where there is cross-over.

Here are 3 tips to help ‘keep your head’ in negotiations:

·      KNOW WHAT YOU WANT – Be prepared, know points that there isn’t an issue, where you are willing to be flexible, and what your deal-breakers are – this is where you want to focus your energy. (Also, consider where they will probably have the same.)

·      IT’S NOT A BLOODY FIGHT – Get your head in the game, a negotiation is simply a conversation, not an argument. Emotions are inevitable when it’s important, so prepare for that and don’t enter into it with a negative mindset. Have a list of questions ready, to help you stay focussed and create time for you to breath. If things get a bit heated, take a break.

·      BE CLEAR, THEN BE QUIET – When you get to talking about your deal-breakers, listen to their position, talk it through to try and understand the core difference of opinion, then – state your position, outline why you feel it is reasonable, then ask the other person if they agree? And BE QUIET, give them to time to think – usually if it is reasonable they will agree with you.

Here’s an example to bring this to life – recently one of my websites went down – normally not the biggest deal. However, it was in the middle of a promotion, so it was a big issue that a white screen was appearing in place of the webpage that readers required. I didn’t know I was entering a negotiation with the web provider, but nonetheless, I did the following:

·      I prepared by taking a few minutes to investigate if I had missed something and I recalled a conversation with them a couple of months ago about how I had received a notification about this site, something was expiring, but when I rang they said they thought I had been spammed so not to worry about it. So, I thought that MIGHT have something to do with it.

·      Adjusted my mindset – yes, this was a bit of a big deal, but I had to get a solution, more than I needed to blame someone. After 30 minutes of investigation, the consultant informed me he could get everything fixed, however I would have to pay the Disaster Recovery team’s fees…..ah, I’m not sure that’s fair….

·      So, I tried to be very clear, I calmly explained that I had rung and discussed this with the company some months earlier and was told ‘not to worry’, which I had done. But as it turns out the current issue is related to that conversation, I think it’s unreasonable for the organisation to expect me to pay for a service that is only required because of an error on their part. I asked him ‘Don’t you agree?’ and I was silent.

·      I’m pleased to say he did some further investigation, spoke to his boss and they agreed. More importantly, he got the problem solved, AND we had a really positive interaction, I was extremely thankful for what he did (and gave him a glowing NPS review).

No need to have a fight or be an a**hole to get what you want – I hope you find this helpful!

Here is a article recently published via Linked In about why you should be negotiating more regularly, and stop avoiding it: Negotiate or get left behind

Nobody wants to get left behind!

With headlines in the press leading into the festival like, “Can Tropfest make its big comeback”, and “Film Festival faces crucial test” the pressure was on.

Add to this, predictions of the highest temperatures in history leading into and during the Festival, there was a great deal of anxiety building.

But, we did it!! So, today I sit and reflect on the last 16 months of working to rebuild Tropfest. I helped create a strategic approach to the future, negotiated to secure long-term partnerships and establish destination partners that will enable Tropfest to develop and grow well into the future!

Tropfest transformations over the last 16 months:

Thank you to the team I have worked with along the way, especially Ben Bartlett, Scott Young, our internal team, the Board and the extended partner team – it’s been an incredible experience. To John Polson, thank you for the trust and faith you placed in me (and Ben) to share the custodianship of this amazing brand in delivering all that we have.

For Tropfest 25, not everything worked, some things were ahead of their time, but so many things were transformational for Tropfest. I truly believe, if Tropfest can fill a park on the hottest day in history, the future is very bright indeed. I proudly say I have helped to secure the future of the World’s Largest Short Film Festival. I am extremely excited for the future and I look forward to watching it grow and grow.

Last week was my first week back after a fabulous break, and I really struggled with apathy. Now, it may have had something to do with the fact that I have a 10 week old puppy that keeps my attention longer than anything else at the moment, but I knew I had to snap out of it. So, here are my top 5 tips for converting apathy to energy to kick start 2015:

If all else fails, buy a puppy and enjoy her madness for a while.

I was recently asked – why is it that men are paid more than women? A hot topic which was debated around the table and one of the suggestions was that women are poor negotiators – I disagree, but afterward it got me thinking… Can I translate some of my knowledge from major deal negotiations to negotiating a pay increase – so instead of waiting for ‘karma to do the work’ here are some of my suggestions:

Negotiation, by definition, is about reaching an agreement – it shouldn’t be a hostile situation. It can absolutely be stressful, but if you are prepared it can be a great opportunity to remind the business what an asset you are (and to take time to remind yourself of that too). I may be crazy, but negotiation should also be fun – you start with “nothing” then push and pull a bit until you both end up with a bit of this and that, shake hands and move on – so try and keep things in perspective from where you start this process.

In my experience if you don’t have this conversation and your peer was to have asked, wouldn’t you kick yourself. So, finally, consider what advice you would give your best friend in the same situation, then go for it!

This blog was initially published in Women’s Agenda in October 2014.